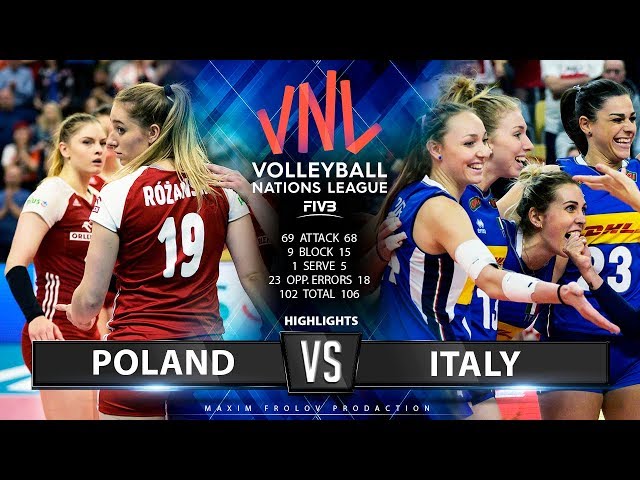 Opole, Poland, May 21, 2019 – Hosts Poland came back from a long journey in their first match of VNL Pool 1, but Italy were the ones to finally scoop the win in a hard-fought tie-breaker. Italy’s top scorer Indre Sorokaite (27 points) praised the collective effort of her teammates.

Italy player Indre Sorokaite: “I think that defence was the key to this victory. Mistakes were also pretty important here, because we made less mistakes and won. In the third and fourth set we had more errors, and in the fifth we saw them on both sides of the court. However, I’m happy, because this is a team achievement – many girls came in from the bench. They performed well and brought a lot of positive motivation with them, so overall it’s a valuable win, because it’s a team win.”

Italy coach Davide Mazzanti: “I’m very glad about this performance. I think we played very well in the first and second set and later we got in trouble in attack. We didn’t play well on transition and had bad timing. Then we had a very good opening in the tie-break, we were playing point-by-point, playing our volleyball. This victory is important for our team and it’s also the first step on our way to reach the Final Six.”

Poland player Joanna Wołosz: “I talked with the coach and it was agreed that if needed, I will be ready to go on court. It was a bit hard for us to get into the game in the first sets, but then with each point, little by little, we managed to do better. I think we came back nicely to make it a 2-3 and it’s a pity that we list in the end, with literally just two-three actions that sealed the game. Overall, I think we can’t complain.”

Poland coach Jacek Nawrocki: “We played nervous today and that was our main problem. I know that my players didn’t show even 50-percent of their skills in the first two sets. I am happy for the cooperation of Joanna Wołosz and the whole team. It was their first game together and they found a common ground very fast. Tomorrow we will play against Germany and we know that every team wants to score points here. It will not be an easy game and I am sure that our rivals will want to take their chance and win with us.”